The thing about being a Picky Bastard is, sometimes the pickiness manifests itself as being contrary. Like, you’re probably thinking:

ah, Weezer. Weezer are shit aren’t they? Only idiots like Weezer. Didn’t they do, like, one good album, right back somewhere near the start of time and then spent the rest of their career arsing it up? That’s certainly the Pitchfork view.

Here was a band who did a good album (the Blue album with ‘Buddy Holly’ on it), then a better album (‘Pinkerton’) which did bad business and led to frontman Rivers Cuomo holing himself up somewhere worrying about his sanity and then – and then – and then – ever diminishing returns. Maybe you tuned out. Maybe you’re one of the Weezer fans who continue to follow them despite disliking mostly everything that follows (and seriously – you people? In the words of Coronation Street’s Jim McDonald: catch yourself on). Or maybe just maybe you’ve been a decent listener, applauding when they do well (‘Hash Pipe’! The White album!), willing to admit their shortcomings when it doesn’t quite work as well as it should (2017’s Pacific Daydream. Ahem). 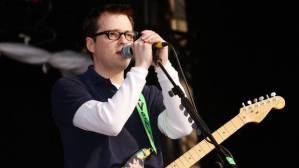 We’ve already had one Weezer album this year – the Teal album, an album of what you might call obvious covers that took the baton handed out by last year’s ‘Africa’ and passed it on to the Eurthymics and A-ha and Tears for Fears and Black Sabbath and TLC. Now if you’re sitting there thinking you don’t need to hear Weezer’s ‘Sweet Dreams’ or Weezer’s ‘Take on Me’ or Weezer’s ‘Everybody Wants to Rule the World’ or… whatever, I wouldn’t disagree with you. I’m not sure the world needs those things. And yet (and yet) if you were to ask me what record I’ve been playing the most this last couple of months? Shame faced, I would have to say the Teal album. It’s got a weird, fucked up, does – not – give- a – royal – shit joyfulness about it. So fuck you and your preconceptions. Or fuck me and my terrible taste. One of those two, right? And now we have the Black album, the album of original songs to complement the covers. And whilst it’s no White album, it’s certainly no Pacific Daydream either.

First, let’s talk standouts. ‘Can’t Knock the Hustle’ is a swaggering, loping, knuckle-dragging melange that leaves you feeling like you’ve sucked back nine different kinds of blue drink. It has a flagrant Vampire Weekend-ness about it and might irritate the shit out of me in about three weeks but for now it has the souped up charm of Paramore’s ‘Hard Times’. ‘High as a Kite’ is a sort of serene wing walk. Rivers is off parasailing, “drifting like a lost balloon”. If you like your guitar pop to have a lot of sunshine in it, ‘High as a Kite’ is for you. ‘Living in LA’ is Weezer by way of Beck circa ‘Colours’. Overproduced dumbness. Cuomo doing his best Sting to sing, “Feel so lonely, feel so lonely”. What’s not to like? ‘Piece of cake’ invites listeners to take hard drugs and witness – via a sweet little ‘do-do-do-do-do-do-do’ vocal refrain – how “she cut me like a piece of cake”. It’s a dark affair but the sunshine remains. This is glass is half full remorse. When they rock, as they do on “I’m Just Being Honest”, you get the sense Cuomo is talking to all those people who said his band was shit. “How about from now on, you write the script, I’ll read the lines?” he says. Oh yeah and ‘The Prince Who Wanted Everything’ is a big glam stomper that wears a ridiculous glittery top hat, twenty nine inch heels and probably has an Internet history it should have deleted.

It’s uneven, sure, Weezer trying their hand at different things but you know what? I’d rather a band tried and failed than serve up the same each time. These guys are pushing themselves. I’m all for that. Which isn’t to say that it’ll convince the haters to give Weezer another try. But for those people who, quietly, without drawing attention to themselves, occasionally like to put Weezer on in the car without a fuck given to who can see – well, you might just find this does the job it’s there to do.