How do you review four days of wonder, merriment, and music excellence? Fuck knows. But here’s my attempt:

Also known as tent and travel day, Thursday was the last time we experienced stress before 4 nights in the beautiful Brecon Beacons. A miserable coach driver. An inevitable delay in arriving. Some missing tent pegs. All of this added up to us missing the opening act NOV3L, a band that I had been listening to pretty regularly in anticipation. Oh well. A storming set from the raucous BODEGA, following by a calmer and more beautiful Brigid Mae Power more than made up for it. We were here, we’d arrived, and it was time to sample some wonderful welsh beers and visit the food stands. More exciting days, without any National Express in sight, lay ahead.

Posters on message boards and tweeters on Twitter had been calling Friday the weakest day for music on the three day schedule of the main event. Not for me. But it wasn’t music that had us up and about by midday – well, not exactly.

A Friday midday tradition at Green Man has become the beer and music matching exploits of beer writer Pete Brown, in which he picks a few songs by artists playing at the festival and finds a beer that accompanies them perfectly. While some may see it only as a way to imbibe a free pint early doors, it’s also a fun and informative hour that makes you think. While drinking free beer.

Friday was, unfortunately, very wet. But that didn’t totally stop us from enjoying the dulcet tones of folky songstress Anna St. Louis on the Walled Garden stage. She has one of those voices that belies her young age and the lyrics to match, and presented a stirring set that would maybe not have matched the sunshine anyway. It was then over to the Far Out tent for Marika Hackman. I’m a massive fan, and will be reviewing her new album here within the next few weeks. She didn’t disappoint. It was the weekend’s first truly exceptional set, a strong mix of songs old and new, and a more ‘rock star’ Marika than I’ve seen previously. This was Friday’s strongest set and was still up there with the top five or six by the time the weekend came to an end.

Following this we had a back and forth between stages which took in Arlo Day (promising), Fat White Family (energetic), Villagers (better live than on record), and Ex:Re (exceptional as always, but slightly ruined by the two ignorant bastards who stood three rows back from the stage and took the piss out of their mate for liking the artist on stage while also looking at photos of cats on Instagram. Cunts.)

But the highest praise for Friday’s evening slots must surely be reserved for Rising stage headliners Just Mustard. Despite the singer clearly suffering with a cold, they produced a performance that managed to be sullen but engrossing, energetic but baleful, and loud enough to blow your ears off. Truly a band to watch out for.

I learnt something about myself on the Saturday.

Every time I go to a festival, I listen to the whole of the lineup and whittle it down to the bands I want to see, getting to know their albums well enough that nearly every set I attend is like a concert for a band I’ve paid specifically to see. Then, when the timetable is announced, my weekend becomes a litany of clashes and dashes between stages.

On Saturday, just because of how things turned out, that didn’t happen. There were only two bands I absolutely had to see, as well as several others I would check out happily but not cry about if I missed. And it ended up being the most enjoyable day of the weekend. Maybe that was partly down to the glorious sunshine, but I think it was mostly the fact that I wasn’t checking my phone every ten minutes to make sure I wasn’t missing the start of a different set to the one I was watching.

That said, if I wasn’t such a massive music nerd I would never have been standing on the front row for Art School Girlfriend. I wouldn’t even know them. And while watching them on the Walled Garden, they became my favourite discovery from this year’s Green Man. With elements of other bands I adore, such as The xx and Daughter, they have perfected the moody electronic sound that so often enthrals me. Go and check them out.

Saturday, eventually, belonged to Big Thief, though. What a gig. Lead singer and songwriter Adrienne Lenker is an absolute musical maestro and she showed it once again here, with one moment during new single ‘Not’ being up their with the best things I’ve seen on a stage. She ended the song with such an aggressive and impressive guitar solo that I could still hear it ringing in my ears a few hours later. She’s absolute magic.

Sunday, also known as IDLES day to the many t-shirt wearers on show at the festival, was far and away the best day of musical performances I’ve seen at a festival. It was superb. There were so many exceptional performances that I felt like I could have died happily as soon as IDLES finished the weekend off with ‘Rottweiler’. But I’m glad I didn’t. I want to go back next year. 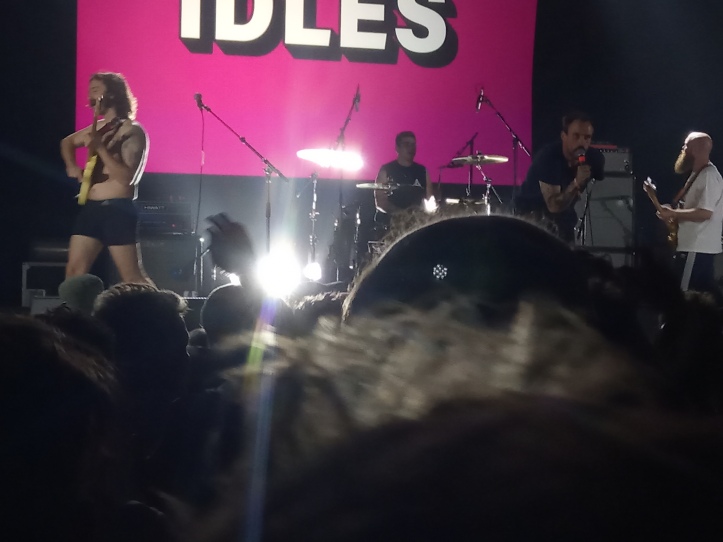 But let’s start with IDLES. It’ll surprise nobody who’s been following the website and podcast, but this was the band at the top of my list when I put together my nerdy wishlist at the start of the festival. And, with the possible exception of Big Thief, I was right to put them there at the top. The energy and love for the band in the Far Out tent was something rare and special, and while the moshing was wild and the elbows were flying, it was all done with a respect and adoration that summed up what this band have achieved in the last couple of years. I hope they enjoyed it as much as we did; because they bloody deserve it.

Bookending such an outstanding day were Mountain Stage openers, Self Esteem. If you don’t know the back story already, check it out, but I’ll just say that this was the most joyful, entertaining, empowering, and powerful set piece of the weekend. A display of friendship, fun, and freedom that you seldom see on stage. So good that I immediately booked tickets to see them again later in the year.

The other top notch performances of the day came from Aldous Motherfucking Harding (also known as my favourite human on the planet) and Sharon Van Etten (although this was slightly spoiled by my bladder). Add to this some really enjoyable performances from the likes of Eels and Wych Elm and it hard to say anything that isn’t unendingly positive. Green Man once again prove that they are the masters of mixing the established acts with the new and exciting, while presenting several fields full of wonder around them. What a festival.

Words and photos by Fran Slater