Our Blind Taste Tests are an opportunity to torture each other: one writer recommends an album the other has never heard, and then forces them to write a review of it after only one listen. Tom’s turns to twist the knife this time around, and Fran the victim.

There are many areas where our music taste differs. I know you’re unconvinced by Danny Brown’s outlandish rhymes; you’re unenthused by the throwback R&B of Blood Orange; you downright hate the droll lyricism of Father John Misty. Yet, we’re in total agreement that In Rainbows represents peak Radiohead; that Joy Division’s Unknown Pleasures is a seminal masterpiece; that The National’s Boxer is a timeless record.

So, in a potentially misguided attempt to avoid another Pinkerton-gate, I’ve picked a record more in keeping with our shared interests. Canadian duo Majical Cloudz only released two albums before going their separate ways, but in the DNA of their stark songs is the bleak lyricism of Ian Curtis and the direct baritone of Matt Berninger. And of course, invoking two of your heroes is a clear own goal – but hey, I’ve done it anyway. Enjoy.

Tommy Boy, how very brave. You have invoked two of my very favourite singers, and I’m now expecting a certain something when the opener and title song kicks in. My next ‘Fake Empire’. You may have, even while being totally conscious of it, set yourself up for a fall from the outset.

But there is certainly something haunting and hypnotic about this opening track, which appears to be almost entirely made up of voices. It’s different. No immediate comparisons of my own come to mind, and I can only see that as a good thing. I’m just one minute and thirty seconds into my first listen, but I can already see that there will be something to bring me back to this album. Just to see how I feel about this song on a second listen.

Track two, ‘This is Magic’, is slightly more conventional but still very sparse, still totally led by Devon Walsh’s voice and the lyrics. I like it. And I have to admit to being totally drawn in by the opening couplet of ‘I feel like a kid/I see some monsters standing over my crib.’ But I do keep waiting for the drums to kick in – I desperately want this song to have drums but it doesn’t. I think because you have me expecting The National and Joy Division, and because I can see where those comparisons come from, I want the song to break. To explode. But it doesn’t – it keeps a steady pace. And you know what? 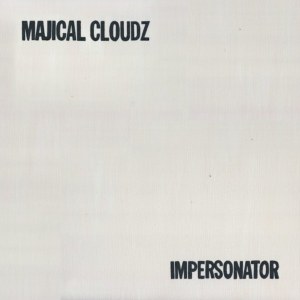 Maybe that’s a good thing. Two songs in and they are already showing an ability to subvert expectations.

‘Childhood’s End’. Fuck, this is gorgeous – you’ve got me, Tom. I love music that is led by the voice and the lyrics, music that forces the words down your throat over a sparse and simple beat. This song is stunning. From the opening lyric ‘someone died/ a gunshot outside’ – this tells a devastating tale of the loss of a father, and the affect it has on the child in the story. This is haunting, and affecting, and lots of other words that end with ‘ing’ and mean something sad.

And then, unbelievably, things seem to get even better somehow. ‘I Do Sing For You’ is so bleak, so beautiful. It’s a song which could almost seem happy if you just read the lyrics, but is absolutely chock full of a bitterness and anger that’s all displayed through the delivery. Kind of makes me think of ‘All I Need’ by Radiohead, and I can think of no higher compliment. I’m all in at this point.

And then ‘Mister’ gives the album exactly what it’s been needing, and an answer to the only concern that has been lingering in my mind over the first four songs. Some drums. A burst of energy. I was literally just thinking that, as much as I was enjoying it, the album would suffer without a change of pace. ‘Mister’ is almost completely led by the repetitive drumbeat – it’s totally captivating. There is so much sadness in his vocal tone – ‘hey mister, don’t you want to be right here?’ just sounds so distressing. We’re halfway through and so far Impersonator is doing everything it needs to, while also throwing in the odd surprise along the way.

But ‘Turns Turns Turns’ is definitely the first misstep on the album for me – feels a bit too overblown and almost like a Europop song from the 8os. With a voice like his, and with such simple instrumentation, they will probably always be on the edge of sounding dramatic and over the top. They’ve walked that line really well so far, but at track six they finally step over it. Not enough to subvert the enjoyment I’m getting from the album, but enough to make me hope that there’s an upturn in the four songs that follow.

‘Silver Rings’ is better, but actually manages to fall on the other side of that line I just spoke about. There doesn’t really seem to be enough here – it’s so sparse, so pared back, that it doesn’t have enough to cling onto. But then, about halfway through – the strings – the change in key. They’re clawing it back; he is using his voice to its fullest effect again. This doesn’t reach the heights of the first few songs, but it’s good. It’s enough.

‘Illusion’, though, is so sparse that it almost isn’t there. My fears that the album might lose its way a bit without some more energetic songs seem to be coming to pass – on its own, ‘Illusion’ isn’t a bad song – but I really hope they have a burst of energy on the following track. Something tells me they won’t.

And they don’t, but I don’t know if that matters when the song is as good as this. ‘Bugs Don’t Buzz’ has the most pained vocal performance on the album so far, and it’s intriguing as hell. He sings about how ‘most cheesy songs end with a smile/ but this won’t end with a smile’ and, without knowing exactly what he’s getting at, you understand that it’s not something good. Here, Walsh shows that songwriting skill that I imagine Tom was thinking of when he made the comparisons he did in his introduction – he isn’t telling you everything with his lyrics, but he’s telling you enough to conjure up the emotion he wants you to experience.

And then we finish with ‘Notebook’. It’s another slow burner, another song that is almost totally led by the vocals. Those vocals are stunning, so that’s okay. And the lyrics are strong, he tells a story. But I can’t help but be a little bit disappointed that the song doesn’t go anywhere new, that it ends the album on a bit of a whimper.

I am a fan of almost every song here, but on first listen I do feel the album lacks some variation. When you invoke The National and Joy Division, you invoke two bands that are big on the bleakness and the sparsity, but also two bands who know how to grow a song, how to make the most of a crescendo, how to mix in some light with the shade. I will 110% return to this album, and I hope that with time I can move away from the comparisons to these other bands and enjoy Majical Cloudz in their own right. But at this point, it feels like an album of two halves – such promise in the opening five songs, followed by a second half that seems to run out of ideas. But in ‘Childhood’s End’ and ‘Mister’, I think you just introduced me to some songs that I’ll still be listening to far into the future.