We almost didn’t go. With Covid-19 wreaking havoc, a trip to a gig seemed slightly unwise but the feeling that this might be the last one in a while, and the fact that musicians need our support now more than ever, won out. We’ll have to wait and see if that was a good decision. As far as the night itself, though, it felt like we’d done the right thing after only a few seconds of watching opening act Caoilfhionn Rose. With a stunning guitar tone and beautiful voice throughout, the set was reminiscent of a slightly folkier Elena Tonra with echoes of The xx on occasion. It was a striking performance that would’ve been worthy of a headline slot.

Interestingly, this was then followed up by a performance poet called Nasima Bee. As good as some of the early poems were, I have to admit that my initial feeling was that sandwiching a poet in between the two musical acts might have been a mistake and could kill the momentum. But as Nasima moved into the more political part of her act, and particularly the material that focused on her identity as a Muslim woman, she really blew me away. These were strong, intimate, and honest poems and her personality shone through. Nasima told parts of her own story in between the poems and she truly is an inspiration. Check her out.

But we were all there, in reality, for the headline act. Manchester based musician Chloe Foy is yet to release an album but has been pumping out singles and EPs on a pretty regular basis over the last couple of years, all of which point to an exciting prospect who, at times, reminds me of Laura Marling. Those who know me will know what a compliment that is. Her latest EP, Callous Copper, is another step forward and is bought to life, in particular, by the strings. So it was a really pleasant surprise to see a string trio setting up behind her on the stage. It is a rare privilege to see such skilled musicians up close and they added a sense of gravity and awe to every part of the set. 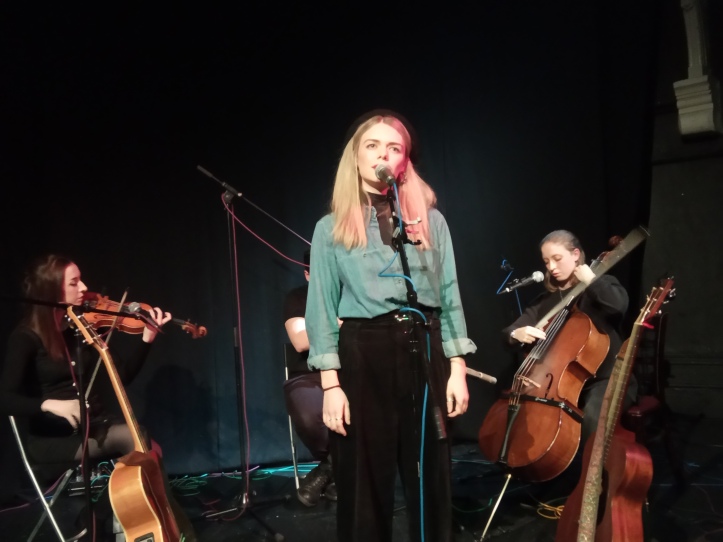 Chloe opened the set with the stunning ‘Asylum’ before moving onto a few of the songs from Callous Copper, the standout of which was ‘Never Be The Same Again.’ This was four songs into the show and came just as I was getting to grips with how strong a performer Chloe is and how assured she appears on stage. With the plucked violin and simple guitar line underneath her strongest vocal performance of the night, ‘Never Be The Same Again’ was probably the most involving moment of a truly outstanding hour of music. Title song ‘Callous Copper’ was equally beautiful. Chloe looks totally at ease and in command on the stage. She seems like she’s been doing this forever.

There was really no let up in quality throughout the whole show, and sitting in the front row made it feel like an extremely intimate and involving gig. Getting to watch the tiniest details in the playing of the instruments so close provided an opportunity to see just how talented a quartet we were watching, and this is something that simply won’t be possible when Chloe moves to the bigger venues she is bound to fill in the future. But as amazing and captivating as the string trio were, the set’s other highlight came when Chloe came back on stage alone for a single song encore. ‘Oh You Are Not Well’ is one of her best releases so far and was the perfect way to end the show.

I’ve been enjoying listening to Chloe since she was recommended to me by fellow Picky Bastard Matt Paul. She has that soaring folk sound that I love. But nothing prepared for me the majesty of seeing her live with a string band. On this evidence, and once we are able to go to gigs again with no concern, I expect to be seeing her on bigger and bigger stages over the coming years. In the meantime, go and buy her EP and get on board. You won’t regret it.