It was a strange gig for me in a few ways. Not only was it my first non-socially distanced show since before the pandemic, but it was also my first night out since the birth of my daughter and one of the first gigs in my adult life where I replaced the alcohol with water and didn’t have to spend 33% of the gig standing in a queue at the bar. So Squid had a fair amount to live up to. It took more than a little work to even get out the door, so they had better be worth it. As I sat among the most people I’ve seen in a room in nearly eighteen months, waiting for the band to take the stage, I kind of doubted that they would be. It felt bizarre. I’ve got used to my livestreams and watching the same four or five concerts on a loop on YouTube. I’ve got used to my own company. Kind of.

I’m pretty new to Squid, too. I only discovered them upon the release of Bright Green Field and haven’t yet dug back through the previous singles and EPs. So when they opened with a song I was unfamiliar with (‘Sludge’), I felt that old feeling of willing them to get straight to the material I’d come to see. I didn’t have to wait long. ‘G.S.K.’ is the first full song on their cracking debut album, and it was the first of the night that new fans like me will have been fully aware of. It set things off with a bang in the same way that it does on the album, only with the added bonus of being able to see the passion and talent of the band in action. I suppose I’d forgotten what live music was all about.

Those won over by Bright Green Field would have plenty to keep them going as the night rolled on. There was a rendition of ‘Boy Racers’ that made the most of an extremely funky guitar line and an intense and brooding ‘Global Groove’ with a bassline so loud that it shook the floors. But in the main part of the set it was the scream of ‘I am my own narrator’ that really set an already excitable crowd alight. ‘Narrator’ stands out on the album, it stands out as one of the best songs of 2021, and with its twists and turns and peaks and troughs, it stood out as the most dynamic song on show at The Albert Hall. 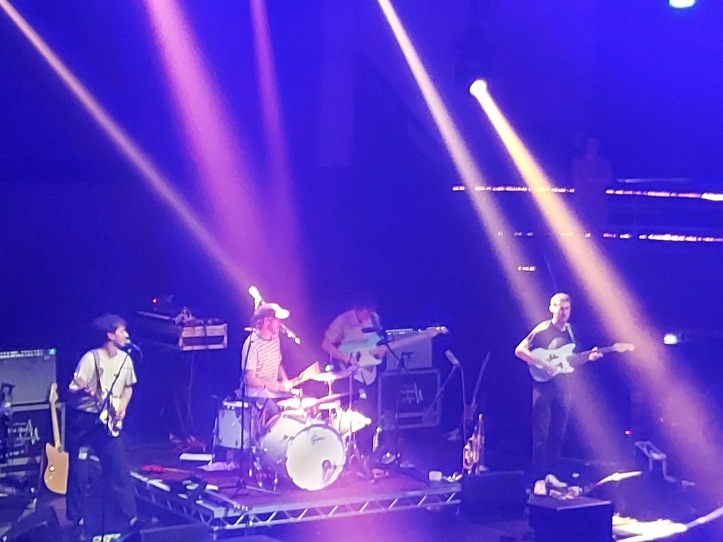 Perhaps most exciting of all, for me, though, was how involving and enjoyable the songs I was less familiar with were. Newer song ‘Fugue’ was an undoubted highlight, with shades of Radiohead in the guitars and percussion. Can’t wait to hear the studio version of that one. Older songs such as ‘Cleaner’ were equally captivating (this song in particular showed a band having fun and doing what they love) and left me having words with myself for not listening to them sooner. I had heard ‘Houseplants’ once or twice, but nothing prepared me for the way that the extended version with which they finished the main set became one of the most enjoyable moments of the whole night.

Encores are so often disappointing, but I was immediately happy when they came out with a superb ‘Documentary Filmmaker’. It might be my favourite song on the album and I’m really glad I got to see Ollie Judge scream the ‘snowy in February’ section from the stage of one of my favourite venues. It was really during closing song ‘Pamphlets’, though, that the true catharsis of the evening washed over me. They upped their performance even further for this song, but the crowd more than matched them in that respect. And as I moved to a better vantage point and took in the whole room for those last few minutes, I basked not only in the mind-blowing show that Squid had put on for us – but also in the sight of a room full of people dancing and singing with abandon. It was fucking beautiful. Jesus, I’ve missed gigs.

You could argue that seeing any band would’ve given me that feeling after so long away, but I’d disagree. Bright Green Field is probably my most played album of the year, but it was only in seeing these boys performing up close that I realised they aren’t going to be a short term thing for either me or the music industry. These lads can play. And it’s extremely rare, and extremely contagious, to see a band that obviously get so much enjoyment out of performing the songs they’ve written. They were clearly loving being up on that stage on Friday – and every single other person in the room loved seeing them up there. If there was any doubt previously, Squid’s performance at The Albert Hall was enough to confirm that this is a very special band – one of the most exciting acts at work in the UK today.